The beautiful, evergreen spice island of Tanzania is known for its spectacular architecture, meandering lanes, luscious tropical fruits, aromatic spices and charming, friendly people. Lying off the coast of Tanzania in the Indian Ocean, it is famous for once being the commercial centre of East Africa and the last place to abolish the slave trade.

Today it combines ancient Islamic ruins, noble Arabic houses with miles of white sandy palm-fringed beaches and coves. The breathtaking beauty of its coastline and the magnificence of the historical Stone Town makes this one of the world's famous touring destinations.

Consisting of Unguja Island, Pemba Island, and Mafia Island, Zanzibar is a common post-safari destination that adds a relaxing, exotic element to a hectic holiday. The ocean offers warm, clear blue waters, idyllic islands, excellent reefs for snorkelling and diving, fantastic deep sea fishing, water sports and of course, delicious fresh fish. And if you thought that wasn't enough, visiting the Spice plantations (cloves, cinnamon, nutmeg, vanilla, cardamom, and others) along with such exotic fruits as tamarind, guava, mango, rose apple and bananas will bring your sense of smells to life. Haggling for carvings in the Central Market is great fun too.

Historically, Zanzibar Island chronicles a far back as 360AD when a Greek traveller connected it to the Silk Trade Route. Then the Arabs of Oman and Shirazi's of Persia came into the scene, and their presence is still manifested in various parts of the island. The 1107AD Kizimkazi mosque, one of the oldest structures of the main island of Unguja, stands testimony of this. The Sultan's transfer of his capital from Oman to Zanzibar in the 19th Century, the introduction of the clove plantations and the flourishing of the notorious slave trade helped develop into a virtual commercial capital of the entire East Africa coastline and its interior and the external world.

As trade between Zanzibar, Arabia and Persia flourished between the 12th and 15th centuries, the Islands became powerful city-states and attracted many settlers from Saudi Arabia, India, Yemen, Oman and Persia. The seas became the haunts of marauding pirates bent on plundering the heavily laden merchant ships that plied between the various nation-states. It is said that the lost treasures of the infamous Captain Kidd are still lying somewhere around Misali Island, awaiting rediscovery.

Local people are an incredible mixture of ethnic backgrounds, indicative of her colourful history. Islam is the dominant religion and practised by most Zanzibaris, although there are also followers of Christianity and Hinduism. The population is estimated at 800,000, with the largest concentration being City which has approximately 100,000 inhabitants. Zanzibaris speak Swahili (known locally as Kiswahili), a language that is spoken extensively in East Africa. Many believe that the purest form is spoken in Zanzibar as it is the birthplace of the language.

Where is Zanzibar located?

What Is The Capital Of Zanzibar? 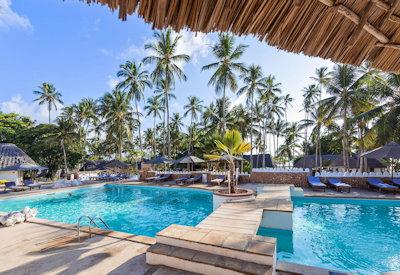 On the East Coast in a secluded tropical setting, the Mapenzi Beach Club is set above a powdery white sand beach about 50 minutes from Stonetown and about one hour from the airport, comfortable accommodation refined in every detail.
Mapenzi Beach Club
Kilindi Zanzibar 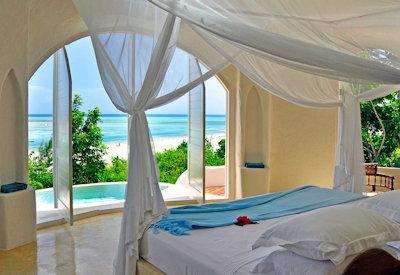 The absolute in 5-star luxury on the island of Zanzibar, the Elewana Kilindi Zanzibar offers up unique architectural design that embraces a sense of calm and tranquillity throughout all the while offering up the ultimate in privacy and romance.
Kilindi Zanzibar
Bluebay Beach Resort 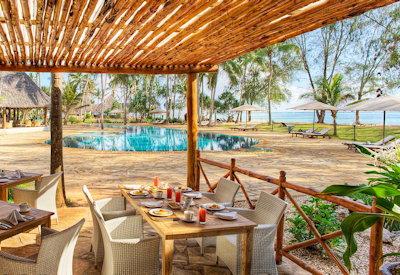 Bluebay Resort is situated on the finest wide, white, sandy beach on the island of Zanzibar, located on the East Coast in an area known as Kiwengwa, the hotel is only 35 minutes drive from the town and the airport on a tarmac road.
Bluebay Beach Resort
Matemwe Lodge 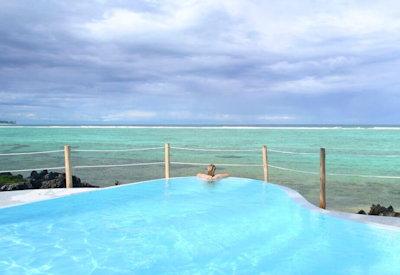 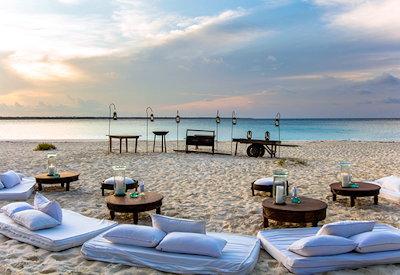 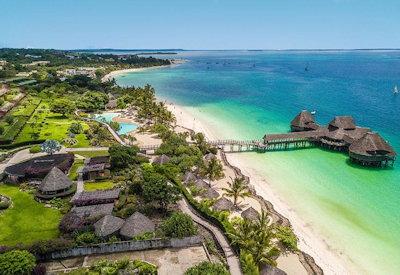 Modern and comfortable deluxe accommodation designed for the most discerning traveler when staying at the beautiful Star resort of La Gemma Dell'Est Resort, located on the North-Western shores of this fantastic tropical island.
La Gemma Dell'Est