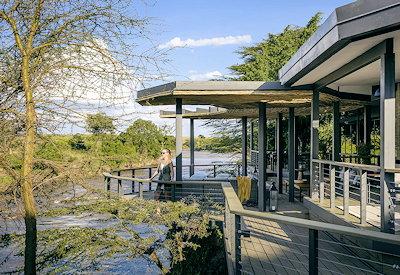 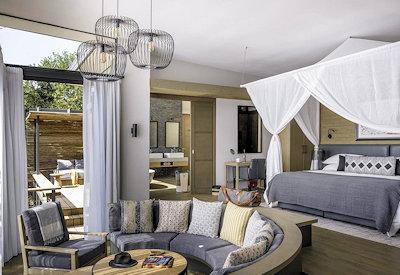 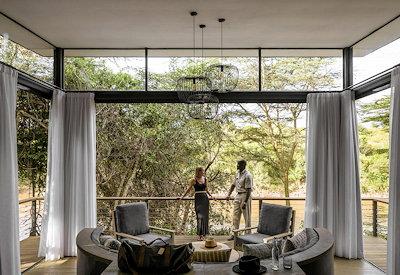 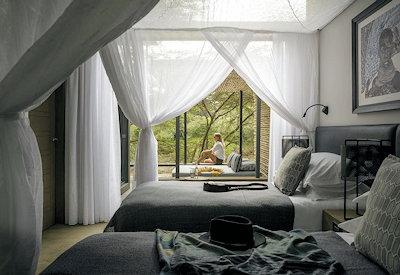 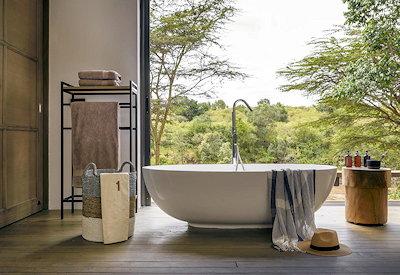 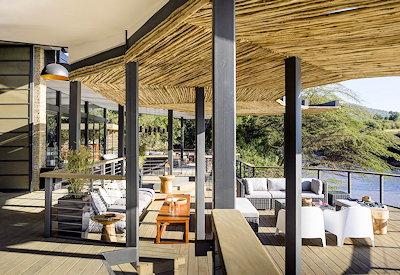 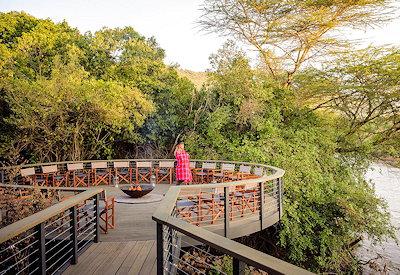 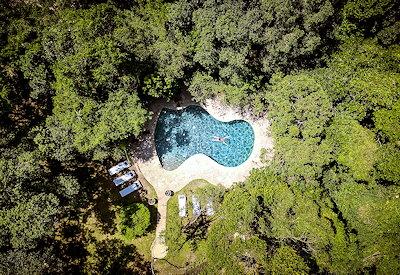 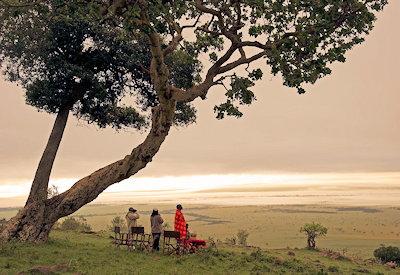 Sanctuary Olonana Camp is an award-winning tented luxury camp on a private stretch of the Mara River at the foot of the impressive Siria Escarpment, close to where the famous last scene from "Out of Africa" was filmed.

Located close to the border with Tanzania, the wildlife concentration is high - and during the annual wildebeest migration, the action happens right on the camp's doorstep.

This small and exclusive Masai Mara Luxury Camp was built along sustainable lines. Along with innovative wetlands and tree-planting projects, Sanctuary Olonana Camp has earned a silver award from Ecotourism Kenya.

The Masai Mara is commonly considered the best game viewing in the world and is fabulous for seeing big cats, their prey and all the Big Five. It is also the stage for the greatest show on Earth - the wildebeest migration. From around July to October, grunting herds of wildebeest and zebra cover the plains, often crossing the river between Tanzania and Kenya, attended by crocodiles, lions and cheetahs.

The perfect luxury camp for any Masai Mara safari options one might be considering.

Sanctuary Olonana Camp is home to some of the most luxurious rooms and suites in all of Kenya.

Built on the banks of the Mara River, the 14 exceptional safari suites at Sanctuary Olonana Camp are incredibly comfortable and spacious, all of which offer stunning views of the surrounding river and surrounding Mara plains.

The camp's safari suites are the perfect choice for those who want to enjoy the ultimate in comfort and privacy.

For families or friends travelling together, the camp's two-bedroom Geoffrey Kent Suite is the ideal option. This airy safari villa offers plenty of space to relax and comes complete with a private safari guide, a private safari vehicle and a private chef.

The main dining room and viewing deck at Sanctuary Olonana commands a dramatic view of the Mara River, providing the perfect setting for breakfast, afternoon tea and after-dinner star gazing.

Breakfast is served before the morning game activity. During your morning game-viewing activity, coffee, tea, and a selection of scones and biscuits will be served out in the bush.

Lunch will be enjoyed back at the camp while afternoon tea is served just before the afternoon game activity and offers a selection of cakes, sweet and savoury treats, tea, coffee and fresh fruit juices.

Afternoon and evening game drives include classic sundowner cocktails and canapés at specially selected spots before returning to the camp for pre-dinner drinks and dinner.

Romantic private dinners on your suite's private viewing deck or by the pool can be arranged upon request.

The wine list at Sanctuary Olonana Camp features an impressive selection of fine wines from around the world. Guests can choose from a variety of reds, whites, and sparkling wines to accompany their meal. There is something for everyone on the wine list, and guests are sure to find the perfect bottle to complement their meal.

The main dining room and decking command views over a dramatic stretch of the river. Complimentary Wi-Fi is available in all safari suites as well as around the central guest area.

Sanctuary Olonana Camp is one of the more eco-friendly Masai Mara lodges out there on the market today.

Game Drives; The Mara is a fabulous place for seeing big cats as well as all of the big five, a variety of plains game and over 300 bird species. From around July to October, the Mara is the stage for the greatest show on earth - the wildebeest migration - when grunting herds of wildebeest and zebra rush across the rivers between Tanzania and Kenya, attracting crocodile, lion and cheetah.

Nature walks; Walk with our naturalist and learn about plants, trees and insects and their use in the daily lives of the Maasai tribe.

Hot air balloon safari(optional activity); Your balloon is inflated against the first rays of sunrise and, once aloft, floats gently over the plains and the plethora of game. After about one hour, the balloon lands and nearby, breakfast is already being prepared. The smells of bacon, sausages and eggs drift on the breeze as you begin breakfast with platefuls of Kenyan fruits and pastries and, of course, glasses of bubbly to toast your flight.

Children of all ages at Sanctuary Olonana Camp. With spacious tents and a wide variety of activities for guests of all ages, Olonana is the perfect choice for a family safari in Kenya.

Between activities, relax at spa at Sanctuary Olonana, which offers various treatments, from facials to body massages. With spectacular views over the Mara River and the soothing sound of the river and hippos in the background - you’ll have no choice but to relax.

Sanctuary Olonana Camp is a luxurious eco-friendly camp located on the banks of the Mara River in Kenya's Masai Mara National Reserve.

The camp offers guests luxurious and spacious tented suites overlooking the Mara River all with en-suite bathroom facilities with indoor showers and views out over some of Africa's most impressive wildlife.

Guests can enjoy delicious cuisine and wine while taking in the incredible natural surroundings, participating in game drives and nature walks, or embarking on an optional hot air balloon safari. Sanctuary Olonana Camp provides an unforgettable authentic African safari experience for all who visit.